There are two different types of spokes used on most spoke wheels. The inner spokes run on the inside of the hub flange and have a 90 degree bend to them.

The outer spokes run on the outer side of the hub flange and are less than 90 degrees.

Install eight more inner spokes down through the hub’s upper flange leaving a open spoke hole between each one. Make sure the spokes are pointing in a counter clockwise direction.

Install eight more inner spokes up through the lower hub flange.  Position these spokes in a clockwise direction.

Place the rim over the hub and inner spokes and lace the upper taped spoke to the first spoke hole to the right of the valve stem hole. Screw a nipple on to the spoke about three turns.

Make sure this spoke is in its correct location or the wheel will not be laced properly.

Install the rest of the inner spokes on the upper hub to the rim leaving every fourth hole open.

Once the inner spokes are in and the their nipples are on loosely, twist the hub in a clockwise direction while holding the rim to locate the spokes in their correct location.

Holding the rim and hub, turn the wheel over and lace the taped lower spoke to the seventh hole counter-clockwise from the first taped spoke, install a nipple.

This spoke will face the opposite direction of the already installed spokes.

Install the remaining spokes to the lower hub flange and install their nipples. The wheel should look like two stars when laced correctly.

Install the nine outer spokes in the lower flange hub in a counter-clockwise direction.

Install the next nine outer spokes in the upper flange hub and connect them to the remaining rim holes and install their nipples.

Tighten all the nipples evenly so that only a few threads show on the spoke.

When truing a wheel always correct the radial hop before correcting the lateral wobble.

To correct radial hop loosen the inside and outside spokes directly opposite of the high spot.

To correct lateral rim wobble you will need to figure out if its the right or left side first. 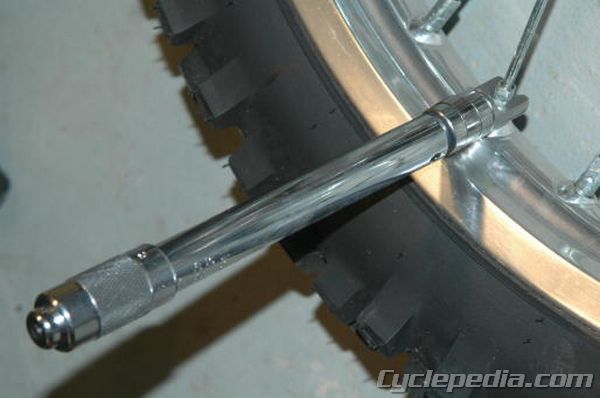 Using a spoke wrench, check the tightness of each spoke. When replacing the tire or tube remove the rim strap and inspect each nipple and lubricate them with a penetrating oil to keep them from corroding. Replace the spokes or nipples as needed. 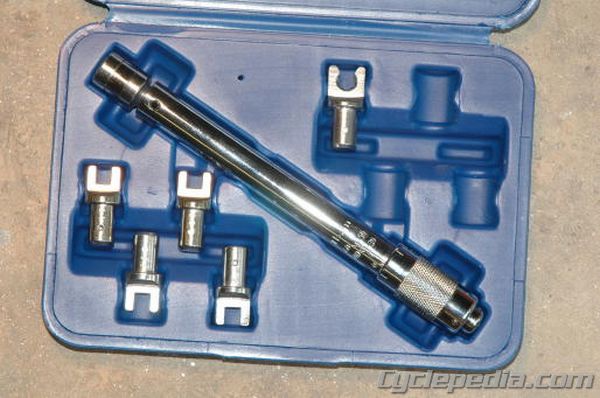 Spoke nipple torque wrenches are available from most motorcycle dealerships and parts suppliers.

Tighten all the spokes evenly to the specified torque.